There is no concensus regarding the date Burton Hall was built. The local authority listing – late 18th to mid 19th century – is probably as close as we can hope to get, but the story starts many years earlier. 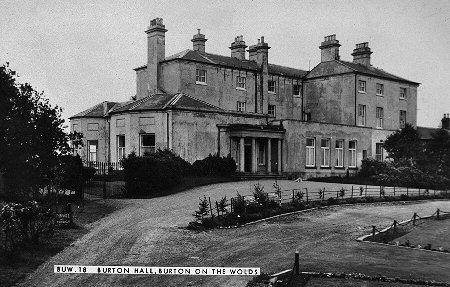 Burton Hall in the 1960s from a postcard.

Towards the end of the 17th century, a wealthy man, Samuel Shalcrosse, came to live on the Leicestershire Wolds. In 1700 he paid £50 for a house which had been the home of Sarah Noone and cow pastures in 'a place called The Twenty Acres and other commonable places of Burton'. Twenty Acre was at the very eastern end of the parish, adjoining the old Roman Fosse; we know not where Sarah's cottage stood.

Samuel's only child, Hannah, had died in 1683 at the age of thirteen, six years later his wife also died, and later that same year he married, at St Marys Marylebone, a widow with a five year old daughter. His second wife died in 1713, and Ann Bushnell, his stepdaughter, became his heir. In his will he refers to her as his daughter, and to her he left all his personal and real estate.

Ann was the wife of Nicholas Mason of Walton. Their first son, whom they called Shalcrosse, died in 1718, but two years later their second son, William Shalcrosse Mason, was baptized at Barrow-on-Soar. He was seven years old when Samuel wrote his will, at the age of 17 he was a wealthy young man, having inherited the Shalcrosse estates from his mother and Mason property from his father.

John Nichols (History and Antiquities of the County of Leicester published 1800) says that William Shalcrosse Mason 'built a good house here, about sixty years ago on a pleasant spot, upon an elevated situation at the end of the village'. If the house in question was Burton Hall, this would date it around 1740, but John Throsby, who produced the second volume of his Select Views of Leicestershire in 1790, wrote that John Noon (William Shalcrosse Mason's nephew and heir) was at that time in the process of building a house 'pleasantly situated, which, when finished, and the grounds laid out as they should be, will be desirable'.

Burton Hall was almost certainly the house which John Noon was building, although his uncle may have started the project. The house which William Shalcrosse Mason built around 1740 was probably the Manor House – now called Manor Farm – although Mr Mason did not in fact hold the Manor of Burton which honour belonged to Lord Rawdon. Local historian Thomas Rossel Potter, who lived at Wymeswold and knew the Wolds area well, referred in 1868 to The Manor House which 'enjoys the same delightful glimpses of Charnwood as the more modern Hall'. Manor Farm is now rendered and it would be difficult to attribute a date, but Margaret Marshall (formerly Towle) whose father and grandfather owned it during the first half of this century, says that the building is old and some of the walls have wattle and daub infilling.

In the 1960s, George Green of the Loughborough Archaeological Society visited the Hall when it was owned by Mr Innes- Smith and wrote 'the house is reputedly of two periods. The entire centre portion was built in 1770 and the two wings (which make it roughly H-type) were added says Mr Innes-Smith in 1840'. However, the two wings are shown in maps drawn up in 1818 when the Hall belonged to John Noon's successor, Charles Godfrey Mundy. Mr Mundy spent a considerable amount of money converting his benefactor's modest country house into a fashionable mansion.

Mr Green then goes on to say that part of the floor was laid in large stone squares very like the kitchen floor at Loughborough Old Parsonage which was thought to date back to 1605. He also refers to the cellars, saying they contained very many arches thrown at cross angles and commenting on the possible antiquity of some of the bricks used, however he did not feel able to confirm that the cellars were medieval though he thought it possible there had been an older building on the site.

There was a second manor house in Burton. It was quite small and formed part of the row of cottages which adjoin the Weslyan chapel. It does not fit the description of the house William Shalcrosse Mason built in 1740 nor could it be said to enjoy 'the same delightful glimpses of Charnwood' as the Hall. It has been rendered, and its thatch has been replaced by a tiled roof, but it could predate both the Hall and Manor Farm.

Twenty Acre was part of the estate when Burton Hall was put on the market for the first time in 1834 – almost 150 years after it was purchased by Samuel Shalcrosse. The little manor house near the chapel was also included in the sale, but to suggest that this might have been Sarah Noon's cottage is, perhaps, stretching the bounds of credibility just a little too far.

Originally published in the WHO (Wolds Historical Organisation) Newsletter 1999.