Burton on the Wolds Village Hall

Prior to the building of the village hall, social gatherings and meetings at Burton were held in homes or draughty barns. Early in 1909 Mr Handel Schofield, the headmaster of Burton school, and Mr Robert Seal, a local farmer, decided that the village needed a proper building for such events. They launched an appeal at a political meeting held in Mr Seal's barn. Although the night was cold and wet, and the audience small, the response was encouraging.

Burton on the Wolds Memorial Hall, probably in the 1960s. Photographer unknown. 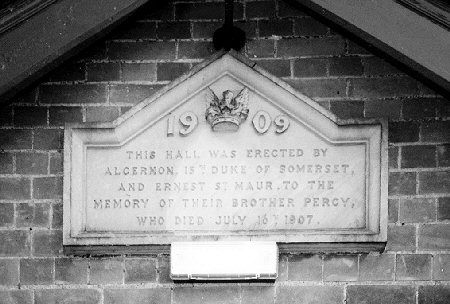 The response was so encouraging that Mr Schofield and Mr Seal talked to Lord Ernest St Maur of Burton Hall about a suitable site for the building. Lord Ernest was the brother of Algernon, 15th Duke of Somerset, who had himself lived at the Hall for several years before succeeding his father. Many years afterwards, Mr Schofield recalled: 'We selected one or two spots, but not the one now occupied. Later on we went to the Hall to see his Lordship. I might say that as we went along we surmised what we might reasonably expect from them as their donation. My estimate was Lord Ernest £15 and her ladyship £10. After a few general remarks about all sorts of things except what we were there for, his Lordship said, 'Well, I expect you have come to see what we will give you'. 'That is so, my Lord', we replied. 'It is a very good object', Lord Ernest replied, 'and we have decided to give you £100'. Mr Schofield went on to say that they were stunned, although not too stunned to ask his Lordship if he would look out for a suitable ready-made building. Lady St Maur suggested bricks and mortar, but the two men said that this was more than they could hope for.

Later, Lord Ernest told them that he and the Duke would build the hall if they would make the arrangements.

On 28th February 1909 a general meeting was held at Mr Seal's house and a committee was formed.

The donations and subscriptions paid for furnishing of the hall by Armstrongs of Market Place, Loughborough; a rifle range and skittles from Thomas Gillott in the Cattle Market; and a piano from G Adcock. The Duchess of Somerset and Lady St Maur provided crockery and books.

Since Lord Percy St Maur, Ernest's twin brother, had recently died, the new hall was dedicated to his memory. It became the Memorial Hall, and an engraved stone was put over the front door.

The hall was opened by the Duchess of Somerset on Monday 13th September 1909. She was presented with a silver key by the architect and bouquets by Sybil Schofield and Ethel Seal. The large audience then sat down to tea and entertainment. Afterwards there was an opportunity to try out the fine dance floor.

The people of Burton enjoyed their new amenity for only five years. In 1914 many of the younger men of the village were called upon to fight for their country. The village hall was closed for the duration of the war and at Lord and Lady Ernest St Maur's expense it was fitted up with beds and became a convalescent hospital for wounded Belgian and Canadian soldiers. Slowly normality returned to the English countryside and very soon the hall was once again open most evenings for billiards and skittles, draughts and dominoes, as well as being the favourite venue for special events.

The Duke of Somerset died in 1923, just a few months after his brother Lord Ernest. He bequeathed the village hall at Burton to the trustees, on the understanding that it should be used for meetings 'upon such terms as they may decide, but not for the meetings of any religious or atheist body, or for the discussion of theological subjects'. A subsequent letter to the local newspaper pointed out that the Duke had played no part in the management of the hall and that the proviso was made by the Committee who 'had a certain reason for taking that course'. The letter does not state that reason nor is the writer identified.

Following the Duke's death, Susan, the Dowager Duchess, gave to the village a photograph of the Duke on horseback and also photographs of his twin brothers Percy and Ernest. These were hung in the village hall.

In 1934, while staying at Beaumanor, the Duchess paid a surprise visit to Mr Seal in company with Captain and Mrs Abel-Smith of Ratcliffe Hall. She expressed a wish to look around the hall, and when she was unlocking the door Mr Seal informed her that she was using the same key with which she had unlocked the door at the official opening. She was able to see the photographs of her husband and his brothers and was pleased to see the hall so clean and cared for. She made a contribution of £5 to the hall fund.

Throughout the years between the two World Wars the hall was the hub of the village. A games and sports committee was formed and to the old favourites were added table tennis, badminton and devil among the tailors. Those keen on acting and singing started a dramatic society and their songs and sketches, along with Mr Seal's comic stories, enlivened such social occasions as the parochial tea and the cricket supper. Burton Hall had become the home of the Earl and Countess of Huntingdon and each year the Countess held a Christmas party in the village hall for the local children.

World War II saw the construction of an airfield on the Prestwold Estate and the village hall was once again needed. This time it became a canteen for HM Forces and played its part for two and a half years until a Salvation Army canteen was opened. Following an influx of Polish refugees at the end of the war the old school at Prestwold corner became overcrowded, and the village hall provided extra classroom space. The breaking up of the Burton Hall Estate following the death of the Countess of Huntingdon in 1954 resulted in land becoming available for new houses and the population of Burton never returned to pre-war levels. The hall continued to be leased to the Department of Education until the new school was built in 1966. It now houses the village playgroup in addition to several clubs, classes and regular meetings.

For almost a hundred years, the Memorial Hall has served Burton well. It has undergone a few facelifts and has been extended a little but it probably looks much the same today as it did when the Duchess performed the opening ceremony. It has more than fulfilled the dreams of Mr Schofield and Mr Seal to provide a centre within the village for the social and leisure activities of the community.