Not everyone in Burton on the Wolds was in accord with the teaching of the established church. John Wildman, probably Burton's most influential inhabitant in the late seventeenth century belonged to a prominent Roman Catholic family and the name of Godfrey Smith of Burton appears in the Quaker Book of Sufferings.

In 1800 Ann Harrison, Ann Cooke, George Harrison and Alice Cooke applied at the Leicester Quarter Sessions to hold services in Ann Cooke's home which was probably in the centre of Burton close to where the Lion's Mouth Fountain now stands. This is the earliest evidence of dissenters actually meeting together in Burton.

The Chapel was built in 1809 on land 'fronting Town Street' and measuring ten yards by nine yards. The tablet over the door commemorates not its foundation but its rebuilding in 1846. 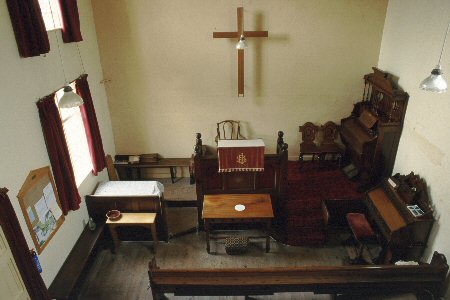 The interior of Burton on the Wolds Methodist chapel in May 1998. Photographs by Bob Trubshaw.

The Chapel ceased to be used for services in March 1998 and has now been converted to living accommodation. The building is easy to find as it stands to the east of the petrol station.