Framework knitting in Burton on the Wolds

No social history of the East Midlands would be complete without an account of its 19th century framework knitters: their cramped conditions, long hours, and low wages; their exploitation at the hands of the bag hosiers and frame owners; the terrible crimes carried out by the Luddites in their fight for justice, and the terrible sentences meted out by the magistrates in retaliation.

'As poor as a stockinger' was an everyday phrase. In 1844 there were 4,140 framework knitters in the town of Leicester and the Victoria County History lists 150 other Leicestershire towns and villages where the trade was carried out. There were well over a thousand frames in Shepshed and almost as many in Loughborough. Barrow on Soar, Walton, Hoton and Wymeswold all had framework knitters. Wymeswold is just one of several places where workshops and cottages can be seen with the typical framework knitters' windows, designed to catch the very last vestiges of precious light.

One of the last framework knitters to work in the industry; photograph taken in the 1950s. 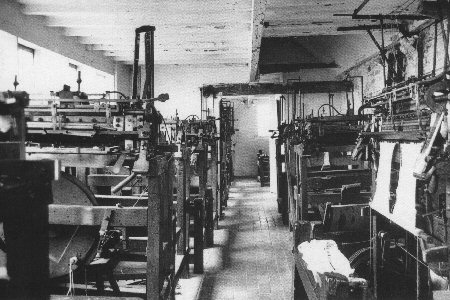 The term 'framework knitter', or 'FWK' as it is frequently written, may conjure images of Victorian deprivation but the knitting frame was actually invented in 1589 during the reign of Good Queen Bess. It was the brainchild of the Rev William Lee, the curate of Calverton in Nottinghamshire. The first stockings had been made from woven fabric, cut and seamed, but as men discarded their long robes in favour of doublet and hose, the fashion-conscious learned to appreciate the superiority of knitted silk stockings from the Continent. Hand-knitted hose was soon being produced at home and Elizabeth I had her own silk women. Legend has it that the Rev Lee invented his machine because his sweetheart was so preoccupied by her knitting she had no time for him. His attempts to get backing in England failed and he took his frame to France; sadly he died before he could enjoy the fruits of his invention. His brother James brought his frame back to England and worked with others to improve it. Eventually they were able to produce a much finer fabric and the new frames proved more successful. Nevertheless, by the outbreak of the Civil War there were still only a few frames in use. These were mainly in the London area, although James Lee had returned with his own frames to Nottingham.

The frame was introduced to Leicestershire by William Iliffe of Hinckley in 1640 and by 1669 there were about fifty in the county. The industry grew and by the beginning of the 18th century framework knitters could be found in many Leicestershire villages, including those in the Soar Valley between Leicester and Loughborough.

Burton-on-the-Wolds is not included in the Victoria County History statistics but during the period 1710 to 1744, when the incumbent regularly recorded occupations, eighteen framework knitters appear in the Prestwold parish registers. There were undoubtedly more; a name will only be listed when a child has been brought for baptism or when there has been a marriage or death in the family and allowance must be made for Nonconformists.

Burton's first identifiable framework knitter was Thomas Alvey. Thomas was probably working in Burton by 1689; in that year he married Ann Thorpe of Queniborough at Prestwold. He was from Basford and was one of several knitters who came to Burton from the Nottingham area.

The Company of Framework Knitters was formed in 1653 and received its charter from King Charles II in 1664. The Nottingham branch met at the Feathers in Wheeler Gate. The chartered Company imposed restrictions that did not suit some of the less unscrupulous masters; in particular it laid down the number of apprentices each master was allowed. Apprentices were cheap and all too often used in preference to experienced journeymen, and it was not unknown for one man to have as many as twenty-six boys working for him. The Company's deputies faced a huge task and even when it attempted to enforce its rules through the courts it did not always win. The integrity of Burton's master framework knitters is not known. It is recorded that one of them, John Mountney, took an apprentice at the deputies' court in Nottingham in 1696, but this was before he moved to Burton.

Unlike their 19th century counterparts, many of the early framework knitters were comparatively wealthy men, entrepreneurs who saw the new methods as a golden opportunity, and in rural districts framework knitting was often combined with agriculture. Nathaniel Corah, for instance, who founded the Leicester company with the famous St Margarets trademark, was the son of a farmer who had a number of knitting frames, some in his own workshop others rented out.

John Mountney was the grandson of William Mountney, a merchant of the staple (i.e. a member of a medieval association of merchants privileged to trade in a staple commodity, especially wool, at the staple towns appointed by the King) with lands at Newbold Verdon. He married firstly Elizabeth Littledyke at Sutton in Ashfield and, after her death, he married Ann Starkey at Quorn. He had a large family, some of whom were baptised at Quorn, some at Woodhouse, and the youngest at Prestwold. He is first recorded at Burton in 1709 when his daughter Martha was baptised. In all, six framework knitters with the name Mountney are shown in the Prestwold parish registers. Four of them – John, Thomas, William and George – were John Mountney's sons, the sixth, an older Thomas, may have been his brother or a cousin.

John Mountney had a substantial property on Burton Bandals (the Bandals is the part of Burton parish that runs down to the River Soar). When John's wife died his house was divided between two of his sons. The workshop was contained within Thomas's portion but William was to be allowed to set up two frames 'for his natural life'. It seems reasonable to assume that Thomas himself would have had as many frames as his brother, if not more, which would suggest a building holding at least four. It may have been larger since other members of the family may have had frames there too.

There is no doubt how many frames George Tompson had because, when he died, his goods were appraised and surveyed by his kinsman George Tompson and neighbour Thomas Henton. In 'the working room' they found three frames they considered were together worth £10.0s.0d. This was more than the value they placed on the contents of his house, yard and personal possessions added together and only exceeded by that of his sheep and cows.

George Tompson owned property and kept a servant. Both he and John Mountney fulfilled the conditions that entitled them to vote in the elections of 1719: that they were 'freeholders of land to a yearly value of forty shillings or more'. His sister Elizabeth was married to John Mountney's eldest son and his sister Martha was married to framework knitter George Hall.

George Hall was a framework knitter and victualler. He lived in a house called Bankside, once the home of his wife's parents, which he had considerably extended. Like John Mountney's home, at the time of his death this was split between two of his sons. (There is no evidence that George Hall was a local man but the name does have historical significance. In the late 16th century, Henry Hall of Gretford in Lincolnshire acquired large estates on the Wolds through his marriage to the daughter of Francis Nele, Lord of the Manor of Prestwold, and his first wife Faith Kempe. Francis Nele's second wife was Jane Hall who later married Henry Skipwith and came to live at the very grand Cotes Park House.)

Christopher Cooke was yet another prosperous man who combined framework knitting with farming. His father owned land on the Wolds as did his uncle, a Loughborough gentleman of considerable fortune and standing.

It is difficult to distinguish between Burton's master framework knitters and those who laboured for them. Some were clearly affluent men who owned land and had other business interests but there are others about whom very little is known.

John Cooper was married to the daughter of Richard Bonsar, George Tompson's great friend. His father was the Burton blacksmith, one of the local craftsmen who would have been involved in the manufacture of the frames.

Samuel Hammond and William Warner were both baptised at Prestwold. Samuel was the son of a Burton tailor and William's father was a gardener. There is no way of knowing whether Samuel and William owned their own frames, rented frames, or worked for someone else, but William did inherit a small field from his father and doubtless kept a few sheep or a couple of cows in addition to knitting.

Francis Shipman and William Selby had both lived at Lenton before coming to Burton. Francis Shipman stayed in Burton for only a few years. He was obviously not a rich man because when he moved to Mountsorrel in 1718 it was necessary for him to obtain a settlement certificate (from Tollerton in Nottinghamshire) in order to reassure the Mountsorrel overseers he would not become a charge on the parish. He probably worked for, or rented a frame from, one of his more successful neighbours and it is likely that he and William Selby had known one another in Lenton and worked together. William Selby remained at Burton until his death in 1751.

John Litherland was the son of a labourer. He came to Burton with his parents when he was just a small boy. Both he and his wife Sarah died in their early thirties and were buried at Prestwold but at least one of their children continued to live in Burton and their son Robert became a stay maker in Loughborough.

John Armstrong was a Barrow-on-Soar man. He married John Mountney's daughter Elizabeth in 1719 at Prestwold and worked at Burton for only a few years before returning to Barrow.

William Alvey was a hosier or middleman with two framework knitting brothers, Thomas and John. He married Esther Norton from Thorpeacre in 1724 and died a pauper at Prestwold in 1772. Perhaps he was not a particularly good businessman, perhaps he became ill or fell on hard times as business declined.

Thomas Alvey Snr may have been the father of William, Thomas and John, but it is more likely they were the sons of William and Mary Alvey of Mansfield and came to the Wolds to work for him. They may have been his apprentices.

On 25 March 1744, following the restoration of the church, the Prestwold curate, Mr Heathcote, turned over the first page of his brand new register. From that date, occupations ceased to be recorded. They were not reintroduced until the printed baptism register came into use in 1813 and this contains no reference to framework knitters. The glimpse of Burton's framework knitting community is brief and somewhat shadowy: a spattering of entries in the parish registers, a few wills, one probate inventory, and little else.

In 1758 knitter John Alvey moved with his wife Elizabeth to Mountsorrel. He took with him a certificate, signed by William Cooper and witnessed by William Hopwell and Joseph Prior, representing the churchwardens and overseers of Burton-on-the-Wolds, confirming his right of settlement in that parish.

Did John Alvey's departure mark the end of framework knitting in Burton? Sons and grandsons of some of the old knitting families remained on the Wolds and the industry may have continued for a few generations but only one framework knitter appears in the 19th century census returns for the parish. His name was Henry Gutteridge. His father was a labourer his brother was a shoe-maker. There is no reason to suppose he was connected with any of the earlier knitting families.