In our anniversary publication Wolds Reflections, we referred to Mr T.R. Potter's Rambles Around Loughborough (1868), in which he wrote, 'Where stood the parsonage of that good pastor of Cotes, who so often risked his life for his people when the Plague was depopulating the village? What Mompesson was to Eyam the devoted Andrew Glen was to Cotes. He cheered the victims with the consolations of religion; he fed and tended them while living, and after their death bore them himself to the graves, which his own hands had dug, for nobody else had the courage to go near the stricken!'? In a later account (Spencer's Almanack of 1871) Mr Potter says it was not Andrew Glen who ministered to the 'temporal and spiritual' wants of his 'poor people', but the Rev Samuel Shaw, and this time he gives the year as 1690 (or possibly 1696 – the print is a little faded).

Human bubonic plague is caused by bites from rodent fleas and in its wake follows the highly contageous pneumonic plague. It still occurs in the United States, India, China and South Africa, and, if left untreated is almost always fatal. Fortunately, modern antibiotics are very effective in controlling the spread of infection. Our forebears had no such weapons and since the Black Death of the fourteenth century (so-called due to the haemorrhages which occur under the skin) the story of the fight against this terrible disease has been written in parish records throughout England.[1]

The heroism of the people of Eyam in Derbyshire is well-known, but by the 1500s, towns and villages throughout the land were taking common-sense precautions to prevent the spread of the disease. In Leicester, markets were cancelled and the assizes moved to surrounding towns, hurdles were erected around infected houses, watchmen were employed to ensure that rules of isolation were obeyed, and special 'pest' houses were set up.

The parish registers for Loughborough state that in 1551 'the Swat, called New Acquaintance, alias Stoupe, Knave and Know thy Master' – presumably euphemisms for the dreaded enemy of the English summer – began on the 24th of May. Nineteen people were buried in six days. In August 1609 a young woman died five days after giving birth, it was January before her son could be baptized. The epidemic raged for 18 months.

The Prestwold incumbent, William Ward, recorded plague in Barrow in 1609 and 'pestis in Loughburgo' in 1610. Unfortunately he wrote nothing of plague within his own flock, although entries in the register do suggest probable epidemics. In 1617, for example, 32 people were buried at Prestwold, 18 of them during the summer months. Deaths for the preceding 30 years had averaged less than 13.

None of the years showing high death rates include exceptionally large numbers for Cotes. The chapel there was the only one of the three chapels of Prestwold – Cotes, Burton and Hoton – to have a resident chaplain. It enjoyed full sacramental rights, and the privilege of burial. If there was a register separate to that of Prestwold, this does not appear to have survived (it could have been lost when the medieval village was abandoned, or burnt in the great fire which destroyed Cotes Park House), neither have we found additional entries for Cotes within the Bishop's Transcripts.

The date given by Mr Potter relates to the life and career of Andrew Glen, but there is no evidence to link Andrew with Cotes. The son of George Glen of Donbridge in Derbyshire, he was a graduate of Jesus College Oxford, and was not ordained until 1687 by which time serious epidemics of plague in Leicestershire were over. He became Rector of Hathern in 1694, and remained there until his death in 1732. 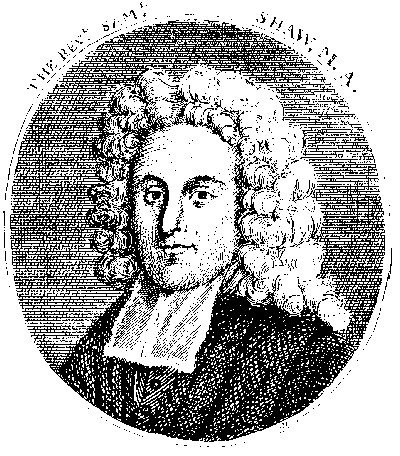 The life of Samuel Shaw, on the other hand, and the troubles which beset his family in the Autumn of 1665 are well-documented. Samuel graduated from St John's College, Cambridge in 1650, and after spending some time as master of the Grammar School at Tamworth, was presented by Cromwell to the living at Long Whatton. His name is included in a list dated 1662 of over forty dissenting Leicestershire ministers ejected from their churches, and he came to Cotes having been ousted from his post at Whatton. He was a man of strong principles, prepared to risk everything for his beliefs despite the fact that he had a young family to support and care for (and apparently a pregnant wife for an entry in the Prestwold registers for February 1661 records the baptism of Mary Shaw, daughter of Samuel 'a clerke'? and Jane – Jane was the daughter of Ferdinando Poole of Thrumpton, another non-conformist priest).

In 1665, London succumbed to the Great Plague, and a relative of Samuel and Jane, desperate for the safety of his family, sought refuge at Cotes. It is said that one of the children was already infected, and that both Samuel and his wife became ill, though thankfully not at the same time. They nursed the sick and in order to confine the disease, they remained within their home for three months. Two of their children, two friends and a servant died; Samuel himself dug their graves and buried them in his garden for no-one else dared to assist.

We have found nothing to support Mr Potter's theory that depopulation of Cotes was the result of plague but the importance of the river crossing and the dangers from the many travellers passing through the village cannot be underestimated. The 1665 epidemic spread quickly and many Leicestershire towns and villages were afflicted, including Melton Mowbray. It could be that Mr Shaw's house was not the only one to be visited by the sickness and that the death toll was actually much higher. We also cannot rule out the possibility that by the 1660s, many of the houses and workshops were already derelict, and that Samuel's congregation consisted merely of the Packe family, their servants, and the few craftsmen who relied on them for a living. In 1670 there were nine households, but it is difficult to make comparisons with preceding years because some figures are unreliable (the lay subsidy for 1572 shows four households whereas ten years earlier an ecclesiastical return had included 23) and others are counted with the other two chapelries and simply returned as 'Prestwold'. There are in Leicestershire over sixty sites whereon once stood a village or hamlet, and it is now thought that most medieval villages in this part of England became deserted due to large scale sheep farming and enclosure. Enclosure of Cotes was early; according to the Victoria County History, it began in 1513, and was 'probably' completed by 1637. However, enclosure itself did sometimes come about because earlier epidemics of plague had caused a drop in population.

The Loughborough parish registers state that in 1561 (after several plague years) the priest, Sir Edward Arnold 'when he had buried all those before written' was himself buried by George Chew. The Rev Samuel Shaw was luckier. He survived the horrific happenings at Cotes and the following year was appointed master of the free school at Ashby-de-la-Zouch. He became one of that town's most famous figures, and among his prolific religious writings is included 'A Welcome to the Plague'? – a sermon written during his three months' confinement at Cotes.

1: In his essay on Galby and Frisby, W.G. Hoskins tells us that the Black Death of 1348–9 may have wiped out as many as one-third or even half of the population, and was followed by similar epidemics in the 1360s and 70s.

The Story of Ashby-de-la-Zouch W. Scott

The Victoria History of the Counties of England – Leicestershire

Originally published in the WHO Newsletter 1997.