The Duchess of Sforza

Once upon a time, a wealthy young man fell in love with a servant girl in his father's house. The result of their affection was a daughter, Caroline. The young man died, and the desperate girl threw herself on the mercy of the child's grandfather, Lord Ferrers. His Lordship was bewitched by the little one's beauty and smitten by her likeness to his son, from whom he had been estranged for several years. From that day, she was his constant companion, and when he died she was entrusted to the care of his great friend Charles Mundy of Burton Hall.

The story was told by T.R. Potter in typical Victorian style when he compiled Walks Around Loughborough in 1840:

'It was, I think, about nine years ago that a decently dressed woman, but evidently of plebeian habits, arrived at Burton Hall, and first earnestly requested, and then imperatively demanded, to see a young lady, then a cherished inmate of the mansion. The stranger's request was peremptorily refused. "Then force only shall remove me from this spot!" was the impassioned exclamation that followed the stern denial. The lady of the house, awed by the woman's firmness, at length relaxed, and it was arranged that she should be permitted to walk around the room in which her daughter was sitting at her drawing, but with the express proviso that she should not address her, or in any way discover herself. This hard and trying stipulation was at length assented to, and the mother was taken round the room under pretext of showing her the paintings and furniture. Years had rolled by since she had been separated from her daughter, and the child had grown into a beautiful girl. The tide of maternal feeling was high. (I know not whether filial feelings were equally excited, or whether the young lady was conscious that it was she on whose bosom she had hung that was so intently gazing upon her.) Pictures and furniture were unnoticed – she only saw her daughter.

'Her heart soon blinded both her eyes,

'And she could see no more.

'She was hurried from the room, and never again, I believe, beheld the face of her child. That mother now keeps, or lately kept, a small public house at Syston: and that daughter is now the Duchess de Sforza, and wife of one of the most accomplished and best descended men in Europe.'

Mr Potter notes that the House of Sforza was founded in 1369 and that Caroline's husband was related to the Dukes of Milan and the famous Medici family. Elsewhere, he says, "We lately had the pleasure of seeing the Duchess of Sforza, who will succeed to this estate [Ragdale] pointing out to her liege lord her green acres from this hill [Six Hills]". 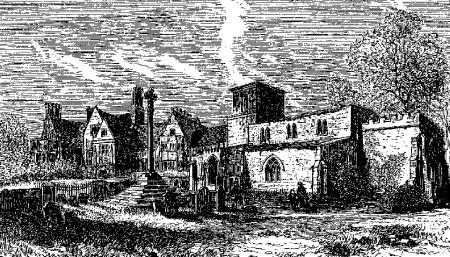 Ragdale Hall and church in the late eighteenth century, from Nichols History and Antiquities of the County of Leicester.

By the time Caroline came to live with Charles and Harriet Mundy at Burton, their resources were dwindling and mortgages increasing. Her own fortune was tied up within the slow and ponderous Courts of Chancery, and to begin with, there was a constant battle to get sufficient money to cover her education and prepare for her future in high society.

Within a few short years, the Mundys were forced to leave Burton. Their lives were now centred around Caroline, and much of their time was spent travelling around Europe at her expense. Great was their delight when she and their son, Charles John Henry, fell in love and became engaged, and great was their forboding when they realised how the Courts would view such a match. No ward of court could marry under age without consent, it was essential that the engagement should be kept secret and no rumour reach the ears of the Court before formal application could be made. To the outside world, Caroline was free and unattached, at home the lovers were inseparable.

In 1836, Mr Mundy said of his ward "she is immensely admired and is engaged for the whole evening before she has been ten minutes in a ballroom. Her brilliant eyes, very clear almost transparent skin, elegant though quiet manners, graceful motion (though not an active dancer) and the universally admired, elegant though simple style in which my wife dresses her have combined to render her decidedly the Belle of the season."

While in Italy, news of the engagement reached a certain Mrs Pole. Threats of revelation were made, and Charles withdrew his suit. All the family's hopes were crushed.

Visits to the Continent continued, and in March 1837, Caroline was the toast of Rome. Proposals came thick and fast, and a short dalliance with a Captain Rodney Mundy involved secret meetings, disguises and false names. There was one man, however, who had fallen head over heels in love with the delicate English Rose many months earlier, but having heard that she was engaged, he had made no formal approach. The background of the Duc Sforza Cesarini was as romantic as that of Miss Shirley herself. Having already settled their estates on a daughter born prior to their marriage, his parents had sent him to a foundling hospital where he was brought up, being then apprenticed to a painter. Only some two years earlier had his true identity been revealed and his inheritance restored to him.

In all good fairy tales, the prince and princess live happily ever after. Caroline married her Duke and settled in Italy. She became Lady of the Manors of Ragdale and Ratcliffe, and some years later, Mr Potter again took up the story, in his inimitable fashion.

'A few years ago a strange couple came from Leicester every day for nearly a fortnight, making sketches of the Hall and its surroundings. The artist and his wife, as they were supposed to be, became favourites with the villagers, and were treated with that hospitality for which Ragdale is so well known. It was only when they were taking their final leave, and leaving a handsome donation for the peasantry, that it was discovered that they were the Duke and Duchess de Sforza! The little bells of the chapel soon proclaimed, in their most gladsome notes, "God bless our landlord and landlady – the Duke and the Duchess."

'That was a proud day for rural Ragdale. "Be careful to entertain strangers, for some thereby have entertained angels", occurred to more than one of the inhabitants of the Dale of the Wreke.'

And we are happy to be able to tell our readers that Charles John Henry Mundy also learned to love again. He inherited estates in Lincolnshire from his mother's family and added her name to his own. Before too long he had started a new dynasty – the Massingberd-Mundys of South Ormsby.

The Shirley family can trace their ancestry back to the Domesday Survey and take their name from Shirley in Derbyshire where they held lands. They came to Leicestershire in the 15th century when Ralph Shirley, Constable of Melbourne Castle and of the Castle of the Peak in Derbyshire married Margaret, daughter and sole heir of John de Staunton of Staunton Harold. In 1874 Caroline, Duchess of Sforza, restored the Church which stood beside Ragdale Old Hall in memory of her ancestors. An heraldic window was put up to commemorate the event.

Documents in the Leicestershire Record Office

Documents in the Lincolnshire Record Office

Originally published in the WHO Newsletter 1998.