The old tithe barn at Cotes

The picture reproduced below appeared in Spencer's Illustrated Leicester Almanack of 1871. The artist was a Mrs Meek and the caption is 'The Old Tithe Barn at Cotes'. 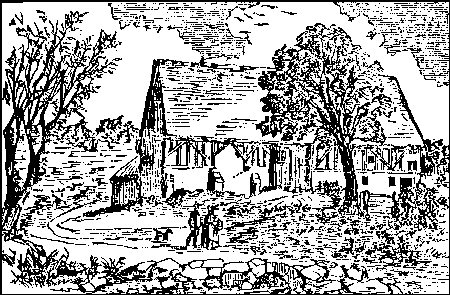 A tithe was originally a tenth and came to mean that portion of produce that medieval parishioners were obliged to set aside for the clergy and the parish. 'Great tithes', those from corn, hay and wood, belonged to the rector, who was often the prior or abbot of one of the large religious orders. The more modest 'small tithes' were divided between the vicar, the maintenance of the church building and the parish poor.

The entry for Cotes in White's 1863 Directory for Leicestershire and Rutland mentions 'a lofty stone barn built during the time of the Skipwiths and measuring 34 yards long by eleven yards wide'. The Skipwiths came to Cotes around 1580 and left after the Civil Wars of the 17th century.

If the barn was actually a tithe barn it is far more likely that it existed before the Dissolution of the monasteries began in 1536. Two monastic establishments with local connections that would have needed such a repository were the Gilbertine Priory of Bolington in Lincolnshire and the Cistercian Abbey of Garendon to the west of Loughborough. Bolington held the advowson of the church at Prestwold with the chapels of Cotes, Hoton and Burton and would have been entitled to the great tithes from those parishes. Garendon had large estates in and around Burton-on-the-Wolds and owned six acres of land at Cotes. It may not have had rights to local tithes but undoubtedly collected them from elsewhere.

From Mrs Meek's picture and a survey of the site, it seems probable that the barn stood close to Hoton Brook, between the ruins of Cotes Park House and Pigeon Lane (the road from Cotes to Stanford).