The ruins at Cotes

Above the Soar, close to Cotes Bridge, once stood a grand house; its ruined walls are extensive and hearth tax records tell us that it had 29 chimneys. Built around 1580, the house was the home of the Skipwiths. William Skipwith was knighted by James I on his accession to the English throne, and Charles I was entertained there in 1645. Beneath its portals, Royalist and Cromwellian armies fought for possession of the strategic Cotes Bridge. As a result of their support for the King, the family were ruined, and in 1653 the house became the property of Sir Christopher Packe, Lord Mayor of London, and staunch supporter of Cromwell. His grandson Clifton abandoned it following a fire in the early 18th century, and moved to Prestwold. The cause of the fire remains a mystery, but suspicion fell on a steward who had absconded with the rent money.

Close by stood the old chapel. Here for centuries the village people had worshipped their Lord, here they had laid their loved ones to rest. On the first of August in the sixth year of the reign of Edward VI (1552), Fraunces Cave, George Vyncent and Mykell Puresey, Commissioners to the King, made a survey of all its 'goodes, plate, juells, and ornaments'. Listed are 'a challice of sylver, tow belles and a smale belle, a hand-belle, tow candellstyckes, a cope of white fustyon, a vestment of the same, three alter clothes and a corporas, tow towelles, a surples'. Nothing remains of the chapel, but the platforms on which stood the cottages and workshops of its congregation can still be seen. 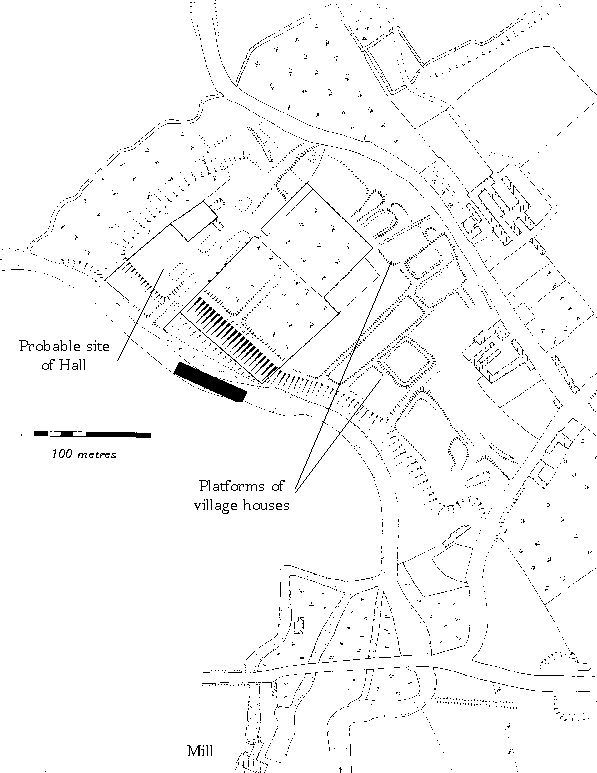 Theories regarding the demise of the medieval village are many and varied. It may have been swept away to make room for the new gardens and terraces; its community may not have survived enclosure of the open fields (which started in 1513 but was not completed until 1637); or they could have left their homes following the fire. T.R. Potter, in Rambles Around Loughborough (1868) says that depopulation was a result of the plague, and that the chaplin, Andrew Glen, risked his life to confine the outbreak by feeding and tending the sick himself, and that he alone dug the graves and buried the dead.

On a fine summer's day, all is now calm and tranquility, but passing the site during an eerie November fog, it is difficult to cast from one's mind the tales of ghosts and hauntings which surround it – though doubtless such stories owe their origins rather less to reincarnations of the past than to the attractions of the vast quantities of strong ale reputed to have been left behind in the cellars of the old house.

Originally published in the Wolds Reflections 1997.