What they say about Cotes bridge 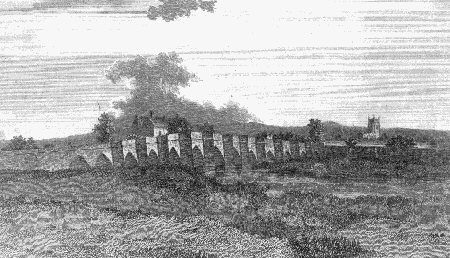 Cotes bridge as depicted in John Nichols' History and Antiquities of the County of Leicester.

This is not intended to be a full history of Cotes, which includes a Civil War battle and more than one royal occasion. It is merely an attempt to bring together a few points, taken mainly from published sources, which are, or may be, relevant to Cotes Bridge.

In his book A Leicestershire Road, published in 1934, Percy Russel writes: "The easiest access to Leicester from the north is by the valley of the Soar and it is along this valley that the principal road from the north has run for at least nine centuries." Mr Russel goes on to say that although traffic from Nottingham to London may always have sought a more easterly passage, travellers to Leicester and Coventry were coming via Loughborough by the twelfth century; the construction of Cotes bridge and causeway must have considerably increased the use of this route. He continues: "From the times of the Plantagenets, therefore, we must envisage a great number of travellers journeying southward to all parts of southern England, working along either side of the Pennines and converging on the road from Loughborough to Leicester; the dozen miles being common to such diverse journeys as York to Bristol, Lancaster to Cambridge, and Nottingham to Southampton."

Writing in the Victoria History of the County of Leicester some twenty years later, Mr Russel expresses the opinion that the long causeway approach to Cotes Bridge may well be older than the bridge itself. The theory is supported by Hilaire Belloc's comments in The Road, published 1924. Regarding the crossing of the Thames at London Bridge, he maintains that "whenever men could first construct a causeway it would have been worth while to have been at that labour across the Southwark marshes in order to establish a permanent crossing by ferry, and later by a bridge". Hilaire Belloc says marsh was, and has always been, the chief obstacle to travel, "man unaided can climb hills, swim water, work his way through undergrowth. But marsh is impassable to him: it is the great original obstacle to progress."

There is no record of when and by whom the bridge was built. In the 2001 edition of this newsletter Philip White related the legend of the two ladies buried at Prestwold who are said to be the daughters of the Lord of the manor and are supposed to have built Swarkestone Bridge. Most legends contain at least a small grain of truth and this one may have had more to do with the beginnings of the bridge at Cotes than the one at Swarkestone. Perhaps the builder of the first bridge at Cotes was one of the local Lords. There is another possibility. Early bridge builders in Europe included the Brothers of the Bridge, and although there is no evidence that they founded bridges in England, religious orders did shoulder the burden of caring for travellers. Sidney and Beatrice Webb, in The Story of the King's Highway first published in 1913, suggest that some early bridges may owe their origins to "the enterprise of particular monasteries". The Cistercian Abbey of Garendon had a large grange and considerable land and property in Burton and surrounding parishes. A bridge over the Soar would have served a double purpose: it would enable the Abbey to fulfil one of its principal duties while at the same time greatly easing transportation of its produce from Burton to Loughborough.

The first certain record of the bridge is from the early 14th century. Once built, the bridge had to be maintained, and this extract from Herbert Cook's Bygone Loughborough, published in 1934, makes it clear that Garendon Abbey was expected to bear some responsibility for its upkeep.

"The Nottingham Road was of some importance and the bridges of Cotes were said to be the wonders of travellers.

"Built in the 13th century, probably of piles, their upkeep was naturally a necessity, and it is not surprising that early in the 14th century the question of liability for the expense was in dispute.

"The keepers of the bridges, William Bosard, of Loughborough and Robert Oseveyne, of Cotes, as the representatives of the Lord of the Manor, collected the tolls levied upon all corn compulsorily taken to the water-mills for grinding. In common with most tolls farmed out by the owner to private persons they were doubtless extortionate and the Loughborough people contended that 'as the bridge-keepers get more out of the bridges than anybody else; let them pay for their repair'. They also maintained that the neighbouring villages of Stanford, Cotes and Rempstone, together with, for some reason, the Abbey of Garendon, should also be held responsible for the proper repair of the bridges. An inquisition was held at Nottingham in 1322 to settle the question and witnesses from Loughborough and the places cited were examined. The Court decided that the said keepers, townships and abbey ought not of themselves to repair the bridges, but that the work ought of right to be done by the free offerings of the whole county, as 'the sheaves of wheat in autumn (the tithes) the money given at the Sacrament, the various gifts and legacies of infirm folk, and the tolls asked and collected of the passengers by the bridge-keepers'."

Alfred White includes a list of the Loughborough bridgemasters from 1332 to 1848 in his History of the Loughborough Endowed Schools published 1969. Transcripts of their accounts can be found in the local studies room of Loughborough Library, however, they do not always identify individual stuctures and it should be borne in mind that the responsibilities of the bridgemasters stretched beyond Loughborough's bridges. Writing in theLeicester Mercury on 11 October 1995, local historian Don Wix, says that after the year 1495 income for repairs was derived mainly from the Thomas Burton or Ralph Lemynton wills.

During the reign of Elizabeth some of the Loughborough bridges were still constructed of wood, but there are records of masons being employed as well as carpenters and sawyers. Although the accounts talk of posts, planks and 'stoupes' for Cotes Bridge, a map drawn up by George Lowe and included in Ann Richmond's book Elizabethan Loughborough (published by the Loughborough and District Archaeological Society in 1992) shows a stone bridge over the Soar at Cotes. Nikolaus Pevsner – Buildings of England, republished with corrections 1992 – dates the remaining visible stone arch to the fifteenth century.

In his history of the Endowed Schools, Alfred White records that the gathering and taking of stones to Cotes Bridge was a constant charge, and this entry in the bridgemasters' accounts for 1619 illustrates the importance of this link between York and London:

"layd out this summer the soume of ten pounds, five shillings and fourpence for ye bridges from Cotes to the Hermitage Close end vidlt newly repayreing from ye floore to the cope the thirteene great arches and ten other arches with new paveinge them in ye foundacon and other places, and gathering and carryeing of about twenty loades of stones and fetchinge the cope stones wth other stones out of the river, and newly poynting, amending, paveing and heighteninge the cartway over the bridges besides many loades of sand for that business... "

The fact that the bridge of 1619 had thirteen arches suggests this may be the structure depicted in John Nichols' History and Antiquities of the County of Leicester, Volume III Part II, published 1804. By the time this volume of John Nichols' great work on Leicestershire was published the stone bridge had either gone or was in the process of being replaced. Mr W. Henderson drew up plans to widen the bridges and add 'battlements' in 1780, and in his 1995 article in the Leicester Mercury Don Wix says it was rebuilt with eight arches in 1795. Work was probably carried out over a number of years.

"Proceeding along the road, Cotes ruins and terrace form a pretty landscape on the left, and the Lower Mills another on the right. Crossing the Soar, on the banks of which many a juvenile Izaak Walton will generally be seen, we stand on the spot so recently fatal to two fellow creatures, and so likely to be fatal to others! It is a most dangerous turn, and it might be altered at so little expense, that its remaining as it does often elicits from the traveller the just remark, 'What are the Commissioners about?' So wrote Thomas Rossel Potter in Walks Around Loughborough published in 1840."

There have been many fatalities at Cotes at times of flood, most associated with, though not actually on the bridge. The east approach to the bridge was three feet lower than the road surface of the bridge itself and although there was a raised footway, this was precarious. The height of the road was not raised until 1880.

Even when this stretch of road was dry, high unstable vehicles must have had difficulty negotiating the sharp bend. A letter written to a local newspaper in 1880, recounted that fifty years earlier "one of the twelve or more daily coaches running between Nottingham and London was coming off the bridge towards Cotes, when – although the coachman (an old veteran) had driven many hundred times with safety – the coach swayed in turning the corner, and fell over, killing poor Pearson, the driver". Between the years 1713 and 1776 twenty-five people buried in Stanford-on-Soar churchyard were identified as 'passengers'. Prestwold was the parish church for Cotes but there are no references to passengers in the Prestwold registers and very few outsiders were buried there. It seems likely that victims of road accidents were taken to Stanford, regardless of whether they died there or at Cotes.

Mr Potter's reference to "the Commissioners" is puzzling. He presumably means the Turnpike Commissioners but the turnpike toll gate was close to the Stanford road (Pigeon Lane) and the short stretch of highway between it and the bridge would have been the responsibility of Cotes parish.

The last surviving records of the Loughborough bridgemasters are dated 1849 and the turnpike trust was dissolved before 1880. From then until 1888 when the County Council came into being, the Highways Board were responsible for the whole road from Loughborough to the Leicestershire border, including the bridge.

In 1959 George Green of the Loughborough Archaeological Society made a survey of the bridge. Before going on to describe the individual arches in detail, Mr Green writes:

"... It is plain that the original row of bridges carried a causeway about 12 feet wide and that practically all of this survives under the modern road. Many of the original stone arches are there complete but in every case the earlier road widenings have added in brick about an extra 8 feet or more to the width. The Military raised this road early in the 20th century – at places by very many feet – so that the stone portions are now well below the present road level. As the remaining stone arches are in some cases to the left of the road and in some to the right it would seem that the original bridges carried a somewhat curving causeway." 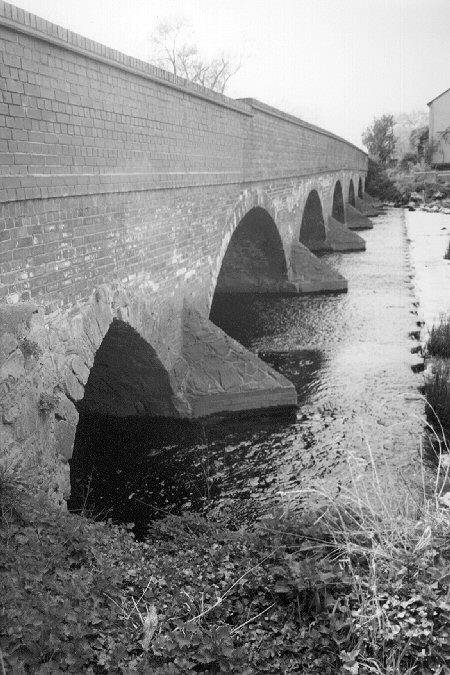 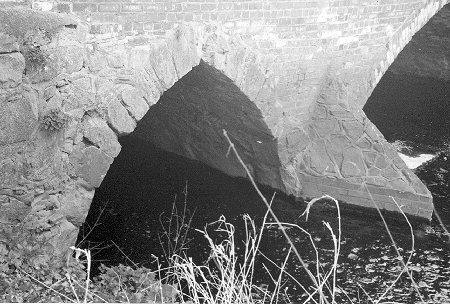 The surviving medieval arch at the eastern end of Cotes bridge. Photographs by Peter Shaw.

Mr Green's notes are filed in the local studies room of Loughborough Library. Since his visit most of the parapets have been rebuilt, but at the time of writing some old brickwork does survive and this may represent the last remnants of Mr Henderson's 'battlements'. One medieval stone arch can still be seen at the Cotes end of the bridge (see photographs above).

Originally published in the WHO Newsletter 2002.